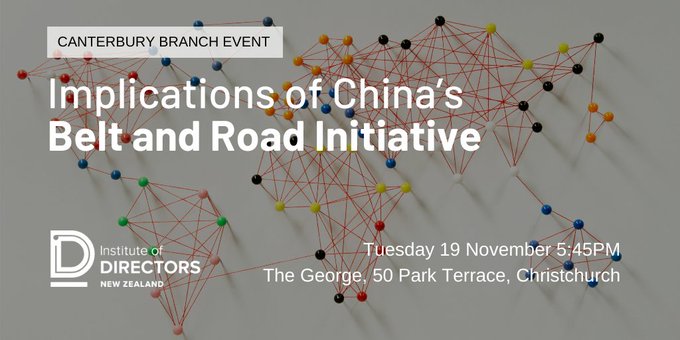 Implications of China’s Belt and Road for Canterbury directors

We are delighted to have NZ China Council representative David Pine, a former NZ Ambassador to the Phillippines and High Commissioner to Malaysia, as our guest speaker.

The Belt and Road Initiative (BRI) was announced in 2013 by Chinese President Xi Jinping and promotes closer ties between countries through development led growth.  But BRI related infrastructure development is changing the flow of goods around the globe and these changes have the potential to impact on the flow of New Zealand’s trade into China.  David will discuss the implications of China’s Belt and Road for Canterbury directors as well as what the NZ China Council is hoping to achieve and the resources they can offer.

David Pine is the local representative for the NZ China Council and has a wide range of international experience in economic diplomacy, trade negotiation and high-level relationship management.

David is a private advisor.  Most recently, he chaired the Trade for All Advisory Board which has just delivered its report to the Government on changes to New Zealand’s approach to trade policy.  He has advised a range of companies and individuals including ASEAN Advisory, KYS Aventura, San Miguel Corporation, the University of Otago and the International Rugby Academy of New Zealand (IRANZ), as well as to the New Zealand Government.  For 21 years David was a diplomat. He was New Zealand’s High Commissioner to Malaysia and Brunei Darussalam (2011-2014) and Ambassador to the Philippines (2006-2008).  In Wellington, he held a number of policy roles, including as the Director of MFAT’s Economic Division.

The Canterbury Branch is proudly sponsored by