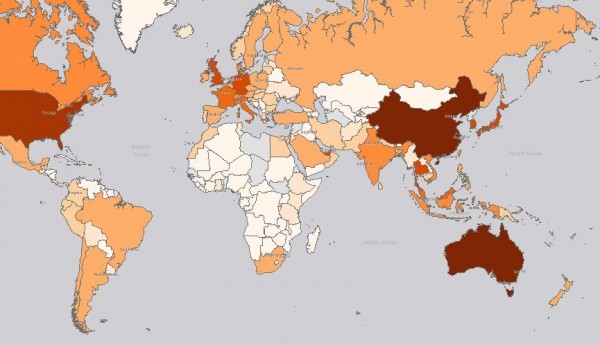 China is New Zealand’s single-biggest export market, accounting for around one in every five dollars of sales of goods and services overseas, according to data first released by Stats NZ in December 2018 (see Goods and services trade by country: Year ended September 2018).

New Zealand’s exports of all goods and services to China were worth $16.6 billion for the year ended September 2018, $2.6 billion more than Australia and almost double the sales to the United States.

Since the year ended September 2016, China has consistently been New Zealand’s top goods export partner. In the past, Australia had almost always been our top goods export partner, only overtaken by China in the year ended December 2013. If the European Union is excluded (because of uncertainty around Brexit), the United States becomes New Zealand’s third-largest export market.

Total goods and services exports ($) to China, Australia, and the United States,2008–18 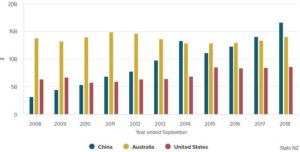 China was New Zealand’s top export market for major exports including dairy products ($4.0 billion), logs and wood ($2.9 billion), and meat ($1.9 billion), for the year ended September 2018. The value of these sales has mostly risen over the past three years.

Travel was our largest services export to China – spending by Chinese visitors contributed $1.6 billion to the New Zealand economy. This was followed by Chinese students who studied in New Zealand ($1.3 billion) and transportation services ($225 million).

For both goods and services (combined), Australia was a slightly larger source of imports ($12.4 billion) than China ($12.2 billion), reflecting the high level of services imports from Australia.

For goods alone, China was the biggest single source of imports, worth $11.5 billion, much greater than New Zealand’s imports in goods from Australia ($6.8 billion), and the United States ($6.6 billion). (Note: Import values are published on a ‘value for duty’ (vfd) basis, ie without insurance and freight costs.)

Since the year ended September 2014, annual goods imports from China have risen 44 percent. 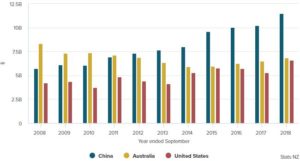 New Zealanders who visited China spent $316 million in the year ended September 2018 – travel was the top service imported from China. The next was transportation services (passenger, freight, and other expenses associated with the transportation of people and cargo) at $233 million.

Published on Stats.govt.nz on 5 Feburary 2019

NZ China Council @nzchinacouncil
MFAT @MFATNZ has been using its network of Posts to monitor how international sea and air ports, and domestic logi… https://t.co/TMnJzvAxar