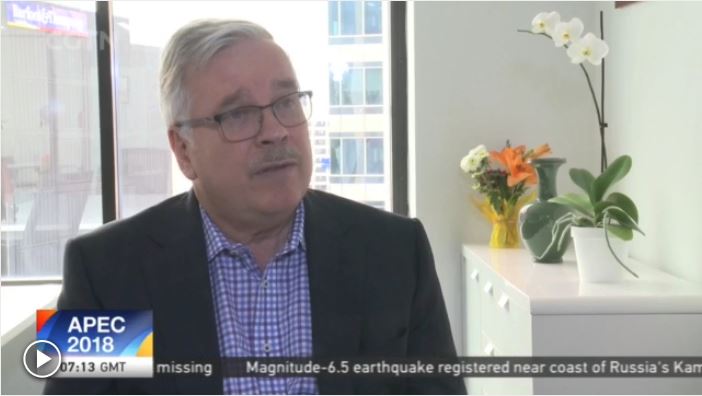 In advance of APEC meeting in PNG, our Executive Director Stephen Jacobi was interviewed by CGTN.

China’s political relationships in the South Pacific will come under the spotlight at the APEC gathering, when President Xi Jinping holds a special meeting with Pacific Island leaders. APEC countries like Australia and New Zealand are taking note of China’s influence in the region. Our correspondent Owen Poland reports from Auckland, New Zealand.

Auckland has long been recognised as having the world’s largest Polynesian population outside the Pacific Islands.

Islanders enjoy special access to New Zealand’s education and health care, but China has rapidly become their new friend after a series of large infrastructure investments.

STEPHEN JACOBI, EXECUTIVE DIRECTOR NEW ZEALAND CHINA COUNCIL “Well the needs for development in the Pacific are great. And they are often precisely in the areas where China has expertise – particularly in developing transport infrastructure.”

China has injected at least one billion U.S. dollars – with a promise of much more – into rebuilding Government buildings, highways and ports in several countries.

STEPHEN HOADLEY, ASSOCIATE PROFESSOR AUCKLAND UNIVERSITY “The Chinese are not out to upset the Pacific Islands or the rest of the world, they’re out in fact to stabilise and to prosper from that stability.”

Concerns have been expressed about the ability of the island nations to repay Chinese loans. And New Zealand’s Foreign Minister says there is “a degree of strategic anxiety” which means that New Zealand has to work harder to maintain a positive influence in the Pacific.

WINSTON PETERS NEW ZEALAND FOREIGN MINISTER “And we’ve got to spend money getting ourselves into that right frame of influence.”

OWEN POLAND AUCKLAND “New Zealand is home to around 300 thousand Pacific Islanders who represent seven per cent of the total population- and many of them buy produce here at New Zealand’s biggest outdoor market where the food and culture reflects New Zealand’s strong ties to the Pacific.”

New Zealand has pledged an additional 470 million US dollars in aid to the Pacific – and Australia has also boosted its spending – which includes an increased military presence.

The New Zealand Government also hopes that its new Pacific strategy will encourage genuine political partnerships based on mutual respect.

STEPHEN JACOBI, EXECUTIVE DIRECTOR NEW ZEALAND CHINA COUNCIL “So we want to work cooperatively with them, and I think also with the Chinese Government, to get the outcomes that are needed for Pacific development.”

All eyes are now on APEC where China’s President Xi will meet with Pacific Island leaders this week.

STEPHEN HOADLEY, ASSOCIATE PROFESSOR AUCKLAND UNIVERSITY “This courting of the Pacific Island leaders is part of a general diplomatic approach. China is no different in that respect to its predecessors in the region.”

And that means the Pacific Islands can no longer claim they’re being ignored by the rest of the world.