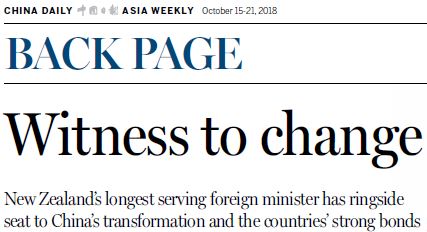 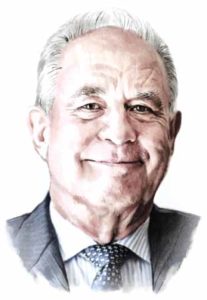 By KARL WILSON in Sydney, karlwilson@chinadailyapac.com

When Sir Donald McKinnon first visited China in 1991 as foreign minister of New Zealand,he saw a country that was undergoing rapid change.

“Did I think it would take off as quickly as it did? No. You knew China was undergoing incredible change, but I didn’t think the change would be quite as dramatic,” said New Zealand’s longest serving foreign minister (1990-99) and current chairman of the New Zealand China Council.

In a recent speech, McKinnon said: “Even if you visit China several times a year, you can be staggered by the changes between trips.

“From Beijing and Shanghai to Guangzhou and Chongqing, people from every corner of the world are there to sell something or buy some-thing. From traders and business-people right through to prime ministers and presidents, all are beating a path to make known their interest in trade and investment.”
China’s transformation has changed how the world views the country, McKinnon told China Daily Asia Weekly.

If Australia is excluded, China has become New Zealand’s biggest trading partner, source for foreign students and tourists, and one of the biggest foreign investors in New Zealand.

“The point is, not only has China changed, so has New Zealand in how it relates to China,” he said. “We may not agree on the same things, but we can still sit down and talk about them.”

As foreign minister, McKinnon put in place an agreement with Beijing to hold annual discussions between the two nations on areas of mutual concern but essentially human rights.

“It is important we maintain our ability and willingness to assert our position when the need arises. This has been the pattern of New Zealand’s relations with global super-powers for the past generation,” he said.

McKinnon has had a distinguished career, as foreign minister, deputy prime minister (1990-96), and secretary-general for the Commonwealth (2000-08), but he never set out to be a politician. Having studied land valuation and farm management at Lincoln Agricultural College (now a university) in New Zealand, he had ambitions of becoming the country’s biggest beef and sheep producer. But farming was not his destiny.

“I was managing a property north of Auckland, close enough to the city boundary that I got engaged in local activities,” he recalled.

“It dawned on me that I wasn’t going to get very far financially doing what I was doing as a sheep and beef farm manager in New Zealand. The closer I moved to the outskirts of Auckland, people kept on asking me to stand for Parliament.”

McKinnon decided to give politics a go and in 1969 stood for the National Party in the seat of Birkenhead (north of Auckland), but was unsuccessful. He stood again in 1972 and lost. By this time, he had “caught the bug” and in 1978 stood again in the new seat of Albany, which covered much the same area as Birkenhead, and won.

McKinnon comes from one of the country’s most distinguished families. Although a fifth-generation New Zealander, he was born in London, and his father was Major General Walter McKinnon, the former New Zealand Chief of the General Staff. McKinnon’s brother John was New Zealand’s secretary of defense and a former ambassador to China.

“I guess my early years helped shape how my life would eventually turn out,” he said.

He graduated in 1956 from Wood-row Wilson High School — in Washington, DC, where his father was the New Zealand defense attache.

Looking back, he said “you can’t live in Washington, DC and not be inflicted by the political virus of that city. There was something in the DNA I was probably not aware of at the time.”

As foreign minister, China was high on his list of priorities, but he was also drawn into issues affecting the region at the time. One issue demanding a great deal of his time was the brokering of a peace settlement that ended a decade of civil war (1988-98) on Bougainville in Papua New Guinea, for which he was nominated for the Nobel Peace Prize.

“That was a particularly trying time,” he recalled. “It required a great deal of patience and understanding on both sides of the divide. But we got there in the end.”

During his tenure (nine years) as New Zealand’s longest serving foreign minister, he oversaw New Zealand’s election to the United Nations Security Council, and increased New Zealand’s activity in the UN, the Commonwealth and the country’s engagement with Asia and China.

He was also the inspiration behind what has now become the Asia New Zealand Foundation from the Asia 2000 Group and the Centre for Strategic Studies, both of which are based in Wellington. He has also lectured on the Commonwealth and International Relations at Harvard, Yale, Georgetown, Oxford, Cam-bridge, Strathclyde and Nottingham universities.

When McKinnon took over as foreign minister in 1990, the world was a very different place. A year earlier the Berlin Wall had come down, and in 1991 the Soviet Union ceased to exist. In China, Deng Xiaoping’s reforms were starting to accelerate. These events set the foundation for the 21st century.

“In New Zealand’s case, China was very important to us and still is,” McKinnon said. “We got through the global financial crisis on the back of China’s consumption of our dairy products.”

New Zealand has seen two-way trade with China grow from around NZ$8 billion ($5.1 billion) in 2007 to more than NZ$24 billion today.

Apart from trade, he pointed to tourism from China and student numbers. “Our relationship with China should not been taken for grant-ed,” he said. “Without China I doubt if New Zealanders would have the standard of living they now enjoy.”

McKinnon said recently that as China’s global economic significance rises, its international influence grows.
“Some commentators like to compare 21st-century China to the Europeans in the 19th century and the US in the 20th.\
“Yes, there are similarities: Countries that become wealthy often spread their influence for strategic purposes or by following their investments. But there is a difference — the British Empire expanded with the motive of economic gain. The US extended its reach in large part for geopolitical influence.”

McKinnon said China’s expansion is based on the need for raw materials and food as it seeks to feed its vast population and continue to lift many millions out of poverty. “Hence, it is investing heavily in places with large agricultural and resource bases, such as in South America, Australia, Southeast Asia and Africa — and here in New Zealand.”

Compared to Australia, its neighbor across the Tasman Sea, New Zealand has a far less antagonistic relationship with China.

McKinnon admitted that from time to time, some New Zealanders express concern about Chinese investment. “But when you look at it, Chinese investment in New Zealand is around 1.1 percent,” he said.
New Zealand, he noted, has maintained an attitude to “get on with it and do the things we do best”.
“That is probably why we have a solid relationship with China.”

He said New Zealand was the first Western nation to sign a free trade agreement with China. “I think China trusts us a nation. It sees us a country which has its own interests at heart and one which does not go out of its way to antagonize others.”

McKinnon said diplomacy, how-ever, can go only so far in forging relationships between nations.
“True and resilient bonds are forged between ordinary citizens,face to face, over many years.”

Donald McKinnon
Former New Zealand foreign minister
Chairman of the New Zealand China Council
Education:
1961: Diploma in land valuation and farm management, Lincoln Agricultural college (now university), New Zealand
Career:
2008-present: Chairman, New Zealand China Council
2000-08: Commonwealth secretary-general
1999: Retired from Parliament
1990: New Zealand deputy prime minister. Also became minister of foreign affairs and trade, and minister of Paciﬁc Island affairs
1987: Deputy leader of the New Zealand National Party
1980: Became the government’s junior whip in Parliament
1978: Won the newly established seat of Albany for the National Party
Honors:
2008: Appointed Knight Grand Cross of the Royal Victorian Order in recognition of his outstanding service as secretary-general
2008: Member of the Order of New Zealand
1998: Nominated for the Nobel Peace Prize for his work in bringing about a peaceful resolution to the decade-long civil war on Bougainville in Papua New Guinea
Books:
2013: In the Ring:
A Commonwealth Memoir
Quick takes:
– Did you want to go into politics?
Not really. My ambition was to be the biggest sheep and beef farmer in New Zealand.
– Who has been your biggest role model?
Sir Brian Talboys, who was in Parliament from 1957 to 1981. He helped deﬁne New Zealand’s place in world affairs, its conduct of foreign relations and its trade links, including the closer economic relations with Australia.
– What was your impression of China during your first visit there in 1991?
A country that was going to become a major regional and global economic power.
– What was your biggest achievement as foreign minister?
I would say my legacy is probably the setting up of Asia 2000. At the time I felt foreign affairs had to play a part in educating New Zealanders about Asia. It has been very successful. I would not discount the Bougainville settlement either.
– Anything you could have done better?
You don’t dwell on those.
Date of birth: Feb 27, 1939