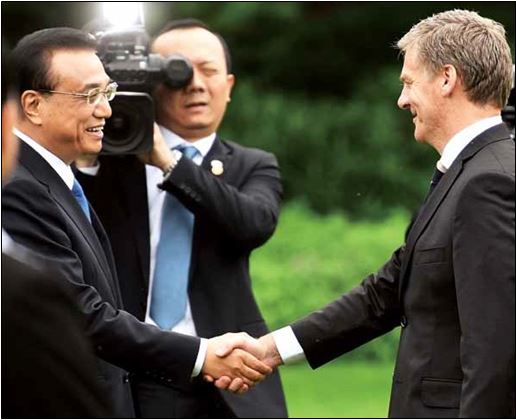 China Daily Interview with Stephen Jacobi: Fitting into the Belt and Road

New Zealand can become a creative hub for the initiative, despite not being geographically located within it

Next month, the New Zealand government will have to decide whether to formalize its Memorandum of Arrangement on the Belt and Road Initiative or walk away from it.

While there have been concerns about how New Zealand will benefit from the Belt and Road, Stephen Jacobi, executive director of the New Zealand China Council, believes the initiative is critically important to New Zealand.

“Belt and Road is not just about trade routes or sea routes,” he told China Daily Asia Weekly. “It’s about how China engages with the rest of the world.”

In March 2017, visiting Chinese Premier Li Keqiang and then New Zealand prime minister Bill Eng- lish witnessed the signing of the Memorandum of Arrangement on Strengthening Cooperation on the Belt and Road Initiative.

The arrangement is not a legally binding document and it gives both countries 18 months to develop a bilateral action plan. The two leaders also agreed to begin talks to upgrade the free trade agreement (FTA) between China and New Zealand, which was signed in 2008.

However, the country’s foreign minister, Winston Peters, has questioned the previous government’s enthusiasm for the Belt and Road.

Speaking at the Lowy Institute, a Sydney-based think tank, Peters said the new Labour government of Prime Minister Jacinda Ardern is still examining how the Belt and Road can benefit New Zealand.

“I think the speed with which they (the former government of prime minister Bill English) did, it showed a lack of, in the case of New Zealand, preparation and thought and consideration as to what it all means,” he said.

However, Jacobi said that although New Zealand does not geographically sit on the Belt and Road land or sea routes, “we should find ways of participating that meet our interests and values”.

“We have to find a way to connect… we have to think about it in a more creative way,” he said.

New Zealand was the first Western developed country to sign a cooperation agreement with China on the Belt and Road Initiative and the first to join the Asian Infrastructure Investment Bank as a founding member.

Unlike its cousin across the Tasman Sea, New Zealand’s relationship with China is on a far more stable footing politically. Over the last two years, relations between Australia and China have not been good.

“Our relationship with China is very important to New Zealand,” Jacobi said. “That’s not to say we do not have our differences.”

The release in early July of a New Zealand government defense report in which China was singled out for its “economic influence” in the Pacific and South China Sea did not impress Beijing.

“We have differences from time to time,” Jacobi said. “But we try not to let them stand in the way of our relationship with China.

“Putting the economic relationship to one side, we are still developing our political relationship with China. Having said that, we are also a country firmly anchored to the West and have a robust democracy,” he added.

“The challenge for us has been to manage that relationship and try not to let different points of view on other matters overshadow the good things we are doing together.”

Over the last decade, New Zealand has become a major market for Chinese investment, education and tourism.

China has become its biggest foreign investor in dairying, with New Zealand now supplying more than half of all dairy products imported into the country.

In terms of foreign students, Chinese were granted more than half of the visas issued to study in New Zealand last year.

They were granted 28,588 visas out of almost 50,000 in 2017, according to Ministry of Business, Innovation and Employment figures.

Chinese investment in New Zealand is not confined to the dairy sector.

“Chinese investment is diverse and spread across a wide cross section of sectors, such as services and film production,” said Jacobi.

“But the debate in New Zealand does not have the same intensity as in Australia. The public perception here is that while the relationship is not viewed as positively as our relationship with Britain or Australia, it is on par with Japan and somewhat better than the US, according to our (New Zealand China Council) research.”

He said the New Zealand government has kept “a close eye” on all foreign investment in New Zealand, including in the property sector.

Jacobi was appointed executive director of the New Zealand China Council in 2016 after a distinguished career in government, where he was deputy high commissioner in Ottawa, assistant trade commissioner in Paris, and adviser on trade and diplomatic issues with the Ministry of Foreign Affairs and Trade.

He believes New Zealand has a role to play in the Belt and Road Initiative.

“To many people, the Belt and Road is about large infrastructure projects. But you can get involved in other ways,” Jacobi said.

New Zealand could facilitate trade and become a creative center for the initiative, he added.

“In many ways, we could become a bridge or a conduit to Latin America… building on the new Maritime Silk Road. Other areas include aviation and tourism,” Jacobi said.

“China has put this great idea (Belt and Road) out there and we can play a part. But we have to do the work to connect.

“We are living in a complex and bewildering time, and we need to find ways to work together  for a more open and inclusive global economy.”

Five years after the launch of the Belt and Road Initiative, there is still much that has yet to be fully explored and understood, Jacobi said. “But what is clear is that this is an extraordinarily ambitious vision which is continuing to evolve.”

New Zealand’s relationship with China has developed rapidly in recent years to the stage of a Comprehensive Strategic Partnership.

“But the FTA can only take us so far. New Zealand now faces greater competition for attention in China,” Jacobi said.

“It’s not that surprising — other countries with superior resources and deeper connections have lifted their game, even cautious Australia has negotiated a very good FTA, Chile has already upgraded their FTA and our European friends are ahead of us in developing people-to-people links.” Jacobi said the New Zealand China Council believes that the country cannot afford to avoid contributing to the Belt and Road.

“If we choose not to engage, others most certainly will, and we will find our preferential position in the Chinese market further eroded.

“At the same time we need to proceed carefully, and in a way which matches our interests, our values and, especially, our comparative advantage,” he said.