The New Zealand China Council and the Confucius Institute in Auckland jointly hosted a Belt and Road Forum in Auckland on 26 October 2017.  Bringing together academics, senior business leaders and stakeholders in the NZ China relationship, the forum advanced thinking about ways for New Zealand to make a contribution to the Belt and Road Initiative.  Speakers included Professors Shen Dingli and Song Gouyou from Fudan University in Shanghai, NZ China Council Executive Director Stephen Jacobi, Professors Paul Clark and Jenny Dixon and Senior Lecturer Jason Young from Victoria University, Colum Rice from PwC and others.

Below is the full address presented by Stephen Jacobi to the forum: 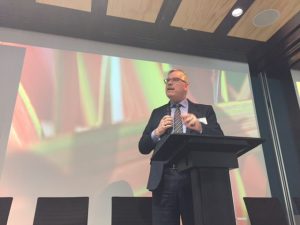 It’s good to be with you and my thanks to the Confucius Institute, Professor Jenny Dixon and Nora Yao for co-operating with the NZ China Council in putting together today’s Forum.

I bring you greetings from the Council’s Chairman, Rt Hon Sir Don McKinnon, who could not be with us today.

It’s a pleasure also to welcome our friends from Fudan University and I would like to thank Professor Shen Dingli for his informative and thought-provoking address just now.

We are meeting at a decisive time, both for New Zealand, as a new government takes office, and for China, as the leadership emerges from the 19th Party Congress.

Both governments, like others around the world, are concerned with a fundamental question – how to ensure national security and prosperity and how to fashion the international environment in such a way in which it promotes peaceful and respectful foreign relations as well as sustainable and inclusive growth.

We had hoped to hear a New Zealand Government viewpoint but our post-electoral process intervened so I am the poor substitute.

Needless to say, my comments represent the views of the NZ China Council, not in any way the incoming Government.

“Belt and Road” is clearly one of those important things.

Having heard from Professor Shen, I’d like to offer a New Zealand perspective focusing on three areas:

What we believe New Zealand can offer Belt and Road

What we in the NZ China Council are doing to make this offer more concrete.

Hopefully, what I should say will provide some background for the panel we are to hear from shortly. 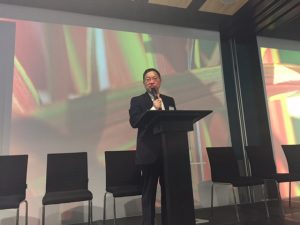 Some four years after the launch of Belt and Road there is still much that has yet to be fully explored and understood but what is clear is that this is an extraordinarily ambitious vision which is continuing to evolve.

When in China earlier in the year I discovered a new academic discipline – “Roadology” – the art and science of Belt and Road.

In the run-up to last May’s Belt and Road Forum in Beijing last May and since then,

the concept has broadened out considerably to focus on a vision for enhanced connectivity between China and the rest of world.

When Chile or Argentina can proudly claim a role in Belt and Road something must have changed!

Belt and Road has also been described as a new way of managing globalisation – a more inclusive, development-led model, as opposed to model based on technology and trade liberalisation.

China clearly sees Belt and Road as a way of showing leadership on globalisation at a time when others especially the US might be seen to be retreating inwards.

But BRI is not going to go away – it is supported at the highest levels of the Chinese Government, is coordinated by the National Reform Development Commission and judging by the discussion at the Party Congress is now seen as a central pillar of China’s economic strategy.

For New Zealand, BRI represents a great opportunity – an opportunity to demonstrate how New Zealand expertise and interests can add value and contribute to China’s vision.

It is also true that New Zealand now faces greater competition for attention in China.

It’s not surprising – other countries with superior resources and deeper connections have lifted their game, even cautious Australia has negotiated a very good FTA.

It is the assessment of the NZ China Council that New Zealand cannot afford to stand aside from developing a contribution to Belt and Road but we need to do so carefully and in a way which matches our interests, our values and, especially, our comparative advantage. 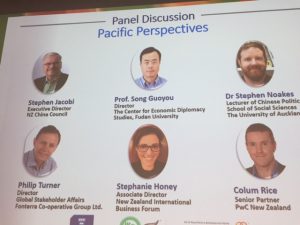 The Memorandum of Arrangement signed between the two governments at the time of Premier Li Keqiang’s visit provides a mechanism for NZ firstly to define how it can contribute to BRI and secondly to present this under a framework for bilateral co-operation.

The MoA is largely aspirational but sets a timetable of 18 months for the development of this co-operation – we understand the official wheels are now in motion to put some greater flesh on the bones of how we might co-operate in the future.

But BRI is not a source of concessionary finance and New Zealand’s infrastructure needs, while acute, are not on a strategic scale when viewed in the context of Belt and Road.

New Zealand has wide policy expertise and services to offer in this area which matches a number of the policy areas China has highlighted for Belt and Road including policy co-ordination, investment and trade facilitation, and cultural and social exchange.

A key task before us at this point is to develop deeper thinking and more specifics about how we can assist and how this can be presented to the Chinese. At the end of last year, we began with colleagues at the Asia New Zealand Foundation to develop our thinking about Belt and Road.

We have sought insight from our colleagues in China and have undertaken outreach through the New Zealand media – our comments are all available on our website.

The strategic pathway adopted in June has three stages:

A process of outreach to New Zealand business and other stakeholders to develop further these ideas.

With the help of the Government, the Asia NZ Foundation and a number of private sector funders and after competitive tender, we have appointed PwC to prepare the report.

I am pleased that Colum Rice, Senior Partner with PwC, is with us today and will participate in our panel discussion.

The report will be ready for release by the end of November and we envisage the web-materials to be ready by the end of the year with the outreach being undertaken in early 2018.

Some of you will know me as an outspoken advocate of the Trans-Pacific Partnership:  I think it possible to deal with multiple abbreviations TPP and BRI!

Contrary to the assertion of some in the media, our Chinese friends are not requiring us to surrender sovereignty in order to participate in BRI – it is up to us to make the running and to come up with ideas that add value, as I have said, on the basis of our interests, our values and our comparative advantage.

Many maps we see of Belt and Road somehow don’t manage to include New Zealand – getting New Zealand on the map is a key challenge!

It’s clear we have much work to do to make sure we in New Zealand are on the fully able to participate in this grand vision for connectivity.

This Forum is an important part of the process and I am delighted that we at the Council could co-operate with the Confucius Institute and Fudan University to bring this event to you.

Developing New Zealand’s relationship with China and other countries along the Belt and Road requires the sort of innovative new thinking that we collectively can bring to bear.

I for one am looking forward to seeing where this thinking might lead us in the future.