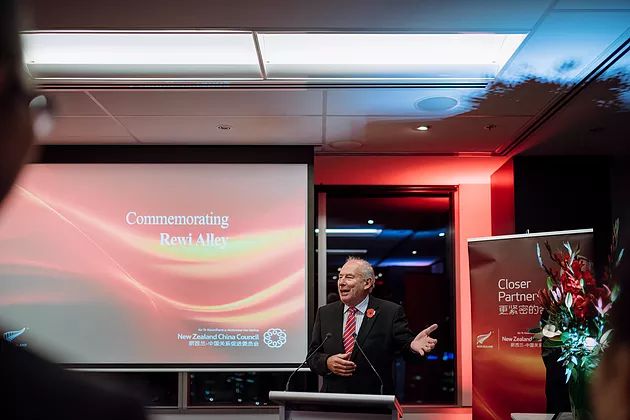 Ninety years ago this month, a young sheep farmer left his land in Taranaki, in his own words, to ‘go and have a look at the Chinese revolution’.

The following 60 years of Rewi Alley’s life are well documented. He was a renowned social reformer, educator, activist and writer through one of the most remarkable and tumultuous periods of Chinese history.

His role in establishing the ‘Gung Ho’ (work together) movement and setting up training schools had a huge impact on the working and living conditions of ordinary Chinese.

But why does Alley matter to us in 2017, given the vast changes that have taken place in both China and New Zealand since his passing thirty years ago?

First, he embodies the qualities we value most as New Zealanders. Here was a young bloke from Canterbury who stumbled, almost by chance, into a foreign country riven with abject poverty and simmering social tensions.

Alley responded as we’d imagine any decent Kiwi to respond, by rolling up their sleeves, and finding practical ways to get stuck in and make a difference.

That’s not to say he was universally regarded as a hero, or was ever entirely free of controversy. For decades, public opinion about his activities was divided back home, especially in the context of the cold war.

Clearly he was a complex man, but despite relations with the New Zealand government that were often strained, he remained an archetypal Kiwi.

Staffers at the Embassy in Beijing in the 1980s who knew him say he was instantly recognisable as a New Zealander of his generation – down to earth, strong minded and hard working.

Alley reminds us that as Kiwis when we see an injustice, we try to do something about it.

The second reason Alley matters in 2017 is because he represents a unique point of emotional connection with China.

As our trade and economic relationship with China grows, we need more of these deeper, more personal linkages to sustain it over the long term. For most Kiwis however, there is very little that ties us to China emotionally.

Alley is one of a small handful of foreigners that China has consistently singled out as being genuinely good and positive toward them.

He is representative of the kind of foreigner that understood China, tried to help China, and ultimately earned the respect of China.The value of this connection cannot be overstated.

The current President of China, Xi Jinping is very conscious of Alley’s legacy because his own father counted him as an acquaintance.

With our relationship with China characterised as being ‘excellent’ and ‘one of firsts’, we owe our thanks to the life and legacy of Rewi Alley.

That is something that can benefit all New Zealand. And that is certainly something worth commemorating.