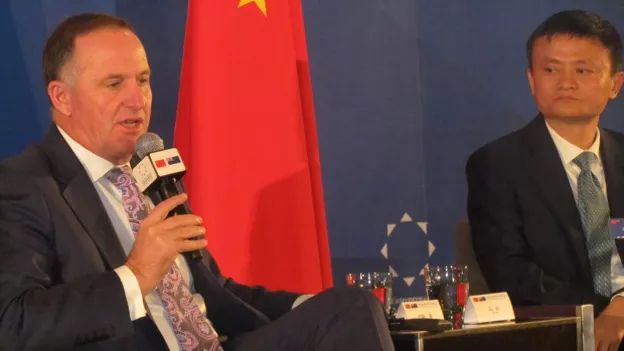 In a room representing more than $100 billion worth of Chinese wealth, Prime Minister John Key has moved to assure China’s heaviest hitters that New Zealand is open for investment.

His comments were delivered at a Chinese business networking event in Beijing, alongside Alibaba billionaire Jack Ma, who also announced the next phase of a major partnership with New Zealand Trade and Enterprise.

He and Ma witnessed the signing of a memorandum of understanding, which will allow New Zealand small businesses greater access to sell their products on the Alibaba online retail platform.

Talking to media after the signing, Ma said he wanted to introduce more New Zealand products to China.

“I think your total population is 4.5 million, and we’ve got 1.4 billion people. So the market is huge … and I think our cities are already demanding a quantity that will scare you guys.

“So this is something that we would love to do; not only buy from New Zealand, we should learn from New Zealand how to protect the environment and then continue to do that.”

Ma said New Zealand oysters and scampi would no doubt be favourite products among Chinese, as well as wine.

During the event, Key and Ma – China’s richest man with an estimated net worth of US$29.1 billion (NZ$42 billion) – held a joint Q&A session, in which they fielded questions on trade between the two nations.

In response to one question from a Chinese shipping magnate, Key downplayed New Zealand skepticism from some quarters, over Chinese investment.

“Firstly, you are welcome in New Zealand from an investment perspective. There will always be people in any country that are fearful of foreign investment and New Zealand, like any country, has those people and they will express that view.

“But we in New Zealand will take that view from a Government perspective, that we’re a fast-growing economy, we want to to develop great international relationship and we also want to have a higher standard of living. We fundamentally don’t have enough private-sector capital of our own to fund that growth.”

He acknowledged the process that the Overseas Investment Office follows could be streamlined further, for a faster decisions over major foreign investment proposals.

While issues of non-tariff barriers to trade and safeguards around the export of dairy products were of high priority in an FTA upgrade for New Zealand, a better Overseas Investment office and extended visa periods were likely to be asked of New Zealand from China.

In talks with the two leaders, Key would also broach the issue of the South China Sea – despite what appeared to be a coordinated warning shot from China’s state media, that any mention could risk New Zealand’s relationship with China.

Throughout day one of a six-day trip, Key witnessed the signing of three agreements, which included the Alibaba announcement, an extension to communications provider Huawaei’s sponsorship of the Wellington Phoenix and an agreement for production company Natural History New Zealand to produce documentaries and children’s programmes for China Central Television.

One of those children’s programmes would be an animated series called Panda and Kiwi – the closest New Zealand might get in the near future at least, to an exchange of the two national animals to each other’s zoos.

Key said it was unlikely he would progress talks of New Zealand taking on a pair of pandas, with either Premier Li or President Xi, as it was not a high priority.

This article originally appeared on stuff.co.nz