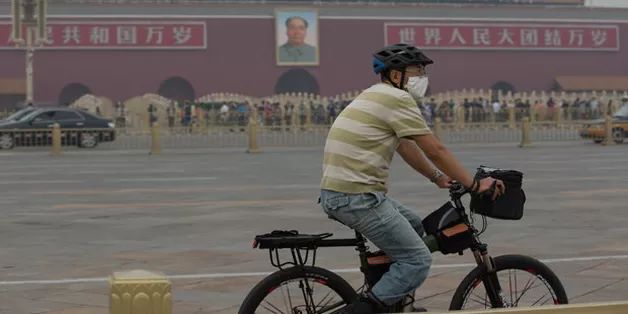 One of the things I love most about China is that whenever you see a traffic jam there’s always an old bloke on an impossibly rickety bicycle picking his way through the chaos.

It doesn’t matter if it’s a security lockdown for visiting dignitaries in Tiananmen Square, a row of quarry trucks stalled in a precarious mountain pass or a Shanghai gridlock full of Bentleys and Lamborghinis. There he is, relaxed but determined, as he pushes on impervious to the noise and confusion.

He’s got somewhere to be. He might ring his bell or he might not and he’ll decide if and when he feels like using his brakes.

He’s lived through the cultural revolution, the economic miracle and now he is cycling on through the great rebalancing.

This sense of destination seems to be an important part of the Chinese character.

Certainly it plays a key part in the official version of the economic story.

Chinese economists and bankers aren’t yet rattled by the increasingly grim-looking macro-economic statistics that have the Western media calling a harder landing for China – at least not publicly.

Last week was a rough one for Chinese economic data.

The big number was first quarter GDP which showed China’s economy now growing at 7 per cent year on year. That’s bang on the target set by Communist Party leaders last year but, ominously for the West, it is a target that has been hit very early.

Other indicators of a faster than expected slowdown last week included: industrial production (year on year for March) at its weakest since November 2008, retail sales up 10.2 per cent, compared with the 10.9 per cent median projection and March Trade figures in which exports dropped 15 per cent from the same period a year earlier.

And we can expect to see that tone continue over coming months. Odds are that the statistics will continue to show plenty of evidence of a slowdown.

In fact, those odds come with a Chinese Government-backed guarantee.

The top line slowdown will continue as manufacturing and construction investment fall.

The real question is: what is the Chinese state’s tolerance for worse than predicted numbers?
How bad do things have to look before more regulations are loosened or more stimulatory spending is deployed? This a state with US$3.8 trillion worth of fire power and the political muscle to deploy it where it wants.

For Chinese leaders this process is all about balancing the transition to a modern, consumption-led economy with the need for social stability.

On that basis, the trends that will really matter are employment and wage growth, particularly in the big tier one and tier two cities.

As long as the middle class keeps growing the plan is on track.

We may see some tinkering. Property lending restrictions that had required borrowers to have 30 per cent deposit for first homes, 60 per cent for second and had outright banned lending for the third have been softened in some cities where property markets have started to stall.

But don’t expect to see this government pull back on heavyweight policy paths such as the reform of local government – which is putting a lid on provincial infrastructure spending and enforcing environmental measures. This will continue to drive a slowdown in demand for commodities like iron ore and coal.

This is a political battle which we are seeing play out in the corruption crackdown that has led to some senior officials being jailed in recent months.

It is not a battle that Beijing will be backing down from. For the Chinese public, success on issues like corruption and the environment are both higher priorities than top-line GDP numbers.

In fact, in terms of a successful transition to the “new normal” they are inseparable.
There’s still huge momentum in the economy.

Even as China’s GDP grows at the slowest rate since 2009, it generates more volume of economic activity than ever.

Total GDP is now US$10.35 trillion. So nominal growth is higher now than it was in 2010 when the country had double digit growth on annual GDP of just $US5.9 trillion.

There are plenty of metaphoric traffic jams to be negotiated in China’s road to a new normal.
There is plenty of uncertainty about what a soft landing or a hard landing looks like – especially for those Western economies like New Zealand that are now so reliant on China’s story.

But one thing we can count on is that China’s leadership is focused on a destination somewhere much further down the road than the immediate obstacles and potholes of short term economic data that will continue to alarm Western observers.

Liam Dann has been travelling in China as a recipient of the New Zealand China Council Media Award.